Yesterday a neighbour gave me a bag of home-grown onions and garlic that were surplus to his requirements.   Gratefully received.   When I put them in a bowl their dried tendrils draped over the edge in a wonderfully informal fashion.  The overhead light created some distinctively graphic shadows not only on the onions in the bowl but also on my kitchen work surface. 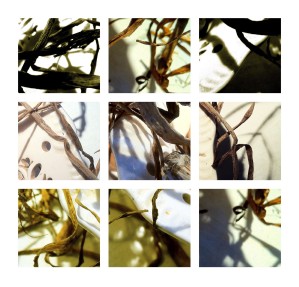 1. shade; shadow.  A region of complete shadow resulting from total obstruction of light.

2. the invariable or characteristic accompaniment or companion of a person or thing.

3. a phantom or shadowy apparition, as of someone or something not physically present; ghost; spectral image.

In Astronomy.  see the Wiki link here for an illustration of the 3 distinct parts of a shadow:

a. the complete or perfect shadow of an opaque body, as a planet, where the direct light from the source of illumination is completely cut off.

b. the dark central portion of a sunspot.

2. Penumbra – a shadowy, indefinite, or marginal area. (from the Latin paene “almost”, “nearly” and umbra “shadow”).

3.  Antumbra – is the region from which the occluding body appears entirely contained within the disc of the light source. (from the Latin ante, “before”).

Anyone for French Onion Soup?