This is all about the women who span 4 generations of my family: 4 stars for four beautiful women.

Starting with my mother-in-law, Jean.

The christening gown that Rebecca is wearing was made by my mother-in-law, Jean.  3 generations later, the same christening gown is worn by baby Rose for her christening.   Here she is cradled in the arms of her Great Aunt Rebecca, now a grandmother herself.

If you are wondering what this has to do with Open Studios, well the timing of these family events happens to coincide with this years’ Open Studios Cornwall.  Consequently, I have only managed to visit a few Open Studios and I wasn’t intending to buy anything but found this little raku glazed pot by Judy Collins (Studio No: 37) at Trewidden Studios and decided to buy it for my daughter as it will go with her collection of ceramics.

From the few studios that I did manage to visit, one of the stand-out Open Studio for me was Susanna Bauer’s (Studio No: 36) with her exquisitely hand stitched magnolia leaves.  (This was purely ‘window’ shopping).

Also Roger Weisman‘s (Studio No: 26) large welded ‘words’ whom I found by chance whilst driving down a lane near Chyenhal.

And Jonathan Smith‘s talk at the Newlyn School of Art, author of ‘Summer in February‘, talking about his book and the film soon to be released.

I found this beautiful limited edition book of etchings, Florence Flies Away, by illustrator, Esther Connon, at last years‘ Open Studios and have been waiting for the right opportunity to give it to Rosie.   I decided to give it to her as a christening present. 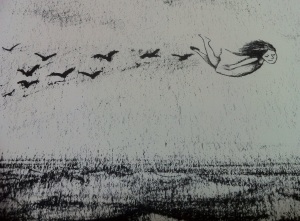 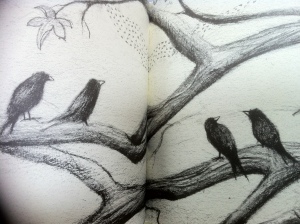 And finally, it is George and Georgina’s (known as the GG’s – pronounced ‘geegee’ – in the family) 2nd wedding anniversary, I have designed these mugs for them which follows the theme of their wedding present from me.  (see here)

This venture was a first for me so a bit of an experiment.  Next time I would like to refine the process and find a better quality plain white mug/cup to work with.  I wonder if anyone can tell me where I might source such a thing?