‘Where are we now?’ croons David Bowie as he emerges from years in the wilderness to create a new album for his fans to celebrate his birthday (8th January).  It’s a good question.  Where are we now and where does the time go?

There’s nothing quite like a birthday or Anniversary to remind us how quickly time passes and  I learn that it was 30 years ago today (17th January) that the BBC just pipped ITV in the race to be the first to broadcast breakfast television.  It is also the whippets birthday as Zola and Tamzin reach three human years today.  And, the BBC are not the only ones celebrating a 30th Anniversary.  Across the Channel (this time a sea crossing not a television station) in the Channel Islands, the Jersey Arts Centre is also celebrating 30 years (gulp) since it’s opening in 1983 by hosting a special  festival of arts.

The Jersey Arts Centre happen to own a couple of my larger paintings, such as the one illustrated here, Plemont Cave, Red, 1996, 4′ x 3′, oil on board.  They kindly asked if they could exhibit one of these in the gallery for the duration, along with works by other artists who have been involved with the Arts Centre in some way or another over that period of time.  Of course I was delighted.  Those early years in Jersey were not only a happy time in my life getting married and starting a family, but also proved to be an important part of my artistic development. 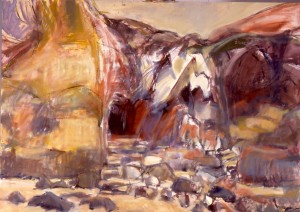 In the latter part of the 1990’s,  I became fascinated by the dark holes that signified entrances to caves along the rocky shoreline.  You can see some of the preliminary ideas for these larger paintings, sketched out in my post, Not all Black and White (exploring caves), focusing on the wonderful caves along the beach at Plemont.

Jersey shares a lot of it’s geology with Cornwall.  Indeed, I believe some of the same seams of granite that run through Cornwall stretch right across the drink to the Channel Islands and on into Northern France.  It is no wonder that the landscape and coastline of Cornwall have a familiar feel.

So, if you just  happen to be visiting Jersey in the next few weeks, (and who knows, you might be?), do take a look.  The whole festival looks like a lot of fun and I wish all my friends who are celebrating this fantastic milestone, a very Happy 30th Birthday!  Just tell me, where has all that time gone?  We might well have survived the Mayan’s predicted ending of the world on 12th December and managed to weather the year that was 2012, but Bowie is right.  Where are we now?